Friars Crag is a promontory jutting into Derwentwater on a stretch of shore about half a mile from the boat landing stages. Ruskin described the view as one of the three most beautiful scenes in Europe. There is an easy path suitable for wheelchairs from the boat landings, with clear views over to Derwent Isle, and across the lake to Brandlehow Woods, the first property acquired by the National Trust in the Lake District.

Friars Crag achieved its name because it was believed to be the embarkment point for monks making a pilgrimage to St Herbert’s Island, located south west of the crag.

It was through the efforts of Canon Rawnsley, vicar of Crosthwaite and one of the founders of the National Trust that much of Borrowdale was preserved from development. On his death in 1920 Friars Crag, together with Lords Island and Calf Close Bay were given to the Trust as his memorial. A plaque to his memory is set into a wall beside the Friars Crag Path.

Also at Friars Crag is a memorial, unveiled in 1900, to John Ruskin, who had many associations with Keswick. He once said Keswick was a place almost too beautiful to live in.

Friar’s Crag is the end destination of a short night walk from the centre of Keswick of approx half a mile. Listen out for the Tawney Owls en route. 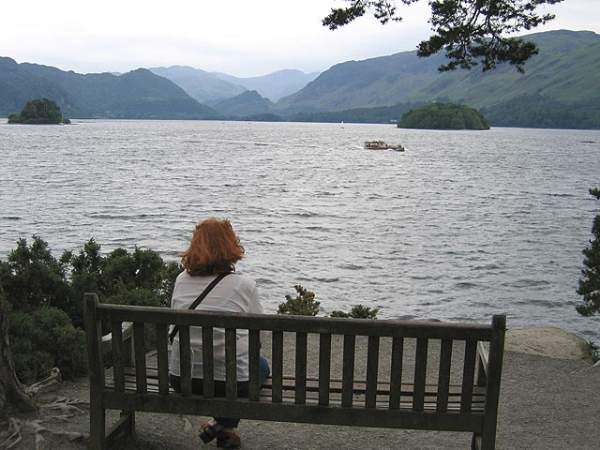 Looking down Derwentwater to Borrowdale from Friars Crag. Derwent Isle, and Friars Crag on the right. Aerial photo by Simon Ledingham.