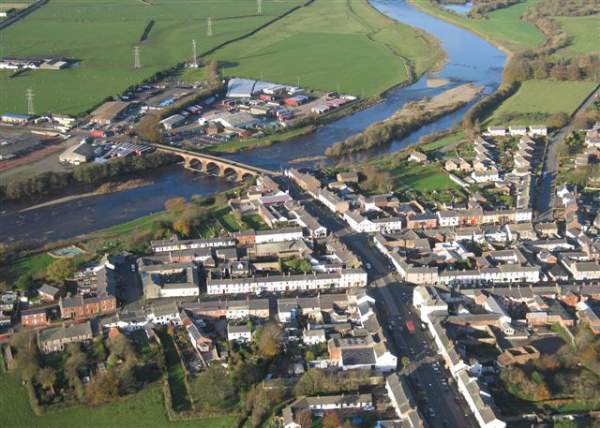 Longtown is situated on the English/Scottish border, three miles from Gretna Green and six from Carlisle. Longtown has a turbulent history that is very interesting when explored. It has a population of about 3000. Unlike many towns, which grew from smaller villages or settlements, Longtown was planned and built in the late 18th century, by the local landowners, the Grahams of Netherby.

Dr Robert Graham laid out the town with the wide tree-lined streets you see today. He established the Graham Arms as a coaching inn to cater for travellers and mail from Edinburgh across the toll bridge. Regular passengers on the coach south were Esk salmon.

On the north bank of the River Esk is the site of the largest sheep market in England. Cattle are also auctioned here. Longtown is a very good location for tourists looking at border history. There is a great deal of history around Longtown, which lies at the heart of the “Debatable Lands” and is close to the location of the Battle of the Solway Moss.

Arthuret Church, which is on the outskirts of Longtown, dates from 1150. It was originally served by the monks of Jedbergh. The present Church, dedicated to St Michael and All Angels was built in 1609 in a late Gothic style. The site of Arthuret parish church is strongly linked to the legend of King Arthur!

Near Arthuret Church lies the site of the famous 1542 Battle of Solway Moss, fought between the Scottish and the English armies. James V had defeated the English at Haddon Rig in August 1542 and then decided to invade England with approximately 10,000 men. Sir Thomas Wharton, with only 3000 English, met him at Solway Moss.