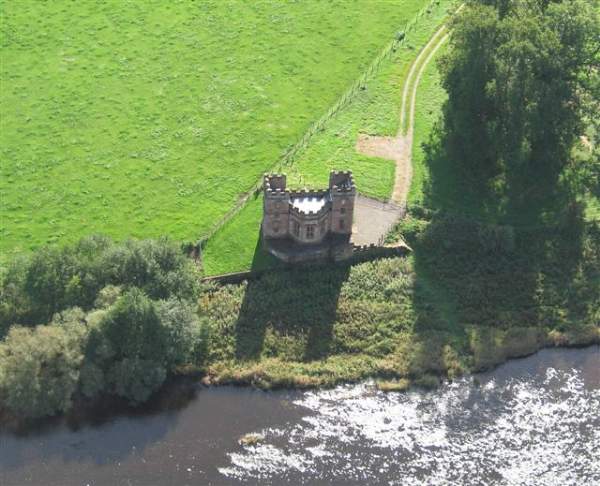 The coop house at Netherby, near Longtown is a striking example of the kind of Gothic pavilion that Georgian gentlemen liked to adorn the landscape around their houses. Coops are normally associated with the keeping of poultry, but the term is also used to refer to a device for trapping salmon. The Coop House, beside the River Esk, overlooks the site of a stone weir once used for fishing.

The Coop House was built probably around 1772, for the Reverend Robert Graham, owner of nearby Netherby Hall, and squire and parson of Arthuret. It was a fine adornment to Dr Graham’s pleasure grounds and would have made a vantage point for watching the salmon fishery. After the weir failed, the house slowly became derelict. After being converted to a home during the 1930’s, it was lived in for a while by a shepherd and his family. When they left it became a ruin. 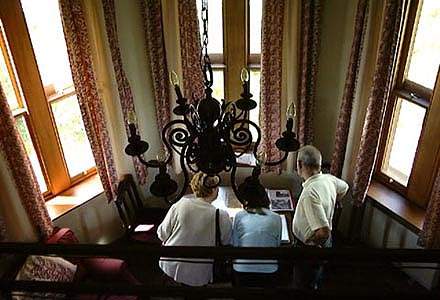 When first built – the house was little more than one room with a projecting bay to give a good view of the river. Each turret had a tall room on the ground floor, and a small room above. There was also an unlit basement. Later a range was installed, and bedrooms made in the turrets. An extra room was added in front of the old front door.

In 1992 the Landmark Trust was granted a lease by the owner to take over the property, and it was restored to a high standard. The Landmark Trust is an independent UK building preservation charity which was founded in 1965 to rescue worthwhile historic buildings from neglect, and then to restore and let them for holidays.

Netherby Hall appears early Victorian, but is a combination of mid 18th century, Jacobean, and a real pele tower behind the Victorian facade. The house was Graham property since the 16th century.

Netherby is the site of a fort, serving as an outpost to Hadrian’s Wall.

Netherby Hall featured in the novels of Sir Walter Scott, notably Marmion, in which the Graham family heiress elopes with young Lochinvar.