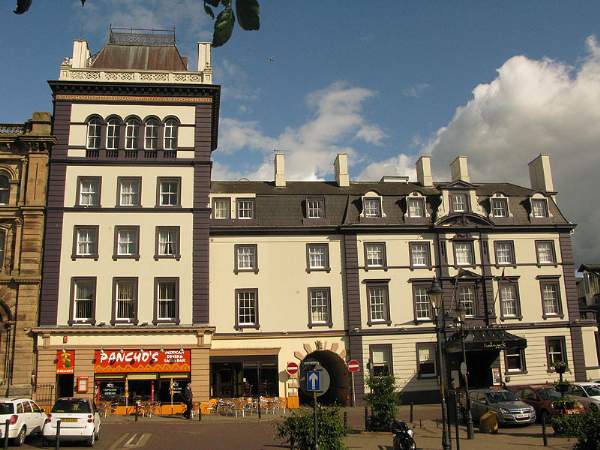 The Hallmark Hotel (formerly the Cumbrian, County, Lakes Court, and Station Hotels) is a stately railway hotel designed in 1852 by Anthony Salvin, a pupil of the eminent town planner John Nash. Having refurbished Windsor Castle, Salvin was considered to be a leading architect of his day. It was extended in 1866 by Cory and Ferguson.

The hotel was built for the arrival of Queen Victoria in Carlisle in 1853 on the way to Balmoral, and it had its own special entrance so her Majesty could walk straight from the railway carriage to the hotel. A special suite was incorporated in the hotel for the Queen. In 1890, William Gladstone addressed the people of Carlisle from an hotel window.

The building of the hotel was financed by George Head Head, mayor, magistrate, and banker of Carlisle. At the top of the hotel you can see the initials GHH and the date 1852. He owned Rickerby Hall which today stands in the public area called Rickerby Park. He is particularly noted for commissioning the large octagonal tower in the park.

Inside, the main rooms on the ground floor have elaborate ribbed plaster ceilings, and the ballroom which forms part of the 1866 restoration retains much of its original detail.

This is now a 4* hotel with use of spa and leisure facilities just 5 minutes walk away. You can check availability, see special offers, and book a stay here..