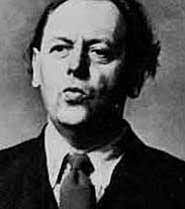 He developed his own style of abstract art which he called Merz (from an advertisement for the Commerz und Privatbank). His art developed to the extent that he is now acknowledged as the twentieth century’s greatest exponent of collage.

Though not a direct participant in Dada activities, he deployed Dada ideas in his work, such as his Merz works — art pieces built up of found objects; some were very small, some took the form of large constructions, or ‘installations’. The Sprengel Museum in Hanover has a reconstruction of the best known of these installations, called Merzbau, which was a redesign of at least four rooms in Schwitters’s house in Hanover.

The original Hanover Merzbau was destroyed by allied bombing in 1943.

Like most German artists, Schwitters was driven out of Germany by the Nazis, and after a spell in Norway, in 1945 he moved with his young companion, Edith Thomas, to Ambleside. Here, financed by the Museum of Modern Art in New York, he started on a new Merzbau in a small stone barn in Elterwater, that came to be known as the Merz barn. At his death he had completed only one wall,

The finished structure was removed to prevent deterioration and is now on display at the Hatton Gallery in Newcastle. Abbot Hall in Kendal possess several of his pictures, as does the Armitt in Ambleside.

Schwitters died in Kendal, and was buried in Ambleside. His grave was unmarked until 1966 when a stone was erected with the inscription ‘Kurt Schwitters – Creator of Merz’. The stone remains as a memorial even though his body was later disinterred and reburied in Hannover, Germany, the grave being marked with a marble copy of his 1929 sculpture ‘Die Herbstzeitlose’.

There is a blue plaque on the house where he lived in Ambleside, and a new book about his time in the Lake District has been published by the Armitt. An annual Schwitters’ gathering is held in Elterwater every year. Dr Johnston, one of the original members of the Armitt Library at its inception in 1912, was a very important person in Kurt Schwitters’ final years in Ambleside, being much more than just his doctor.