High up in the North Pennines, Alston claims to be the highest market settlement in England, being about 1000 feet above sea level. It is also remote, about 20 miles from the nearest town. From every direction Alston is approached over a broad, heather-clad Pennine landscape which has been designated an Area of Outstanding Natural Beauty. Set on the upper reaches of the River South Tyne, it lies within the Eden district of Cumbria.

Alston has a steep cobbled main street with a distinctive market cross, and many stone buildings dating from the 17th Century. Next to the entrance to the Church, is a building dated 1681. The Angel pub to its left is dated 1611, and the white building left of the pub is dated 1687. It is a bustling town, with a reputation for delicious locally made specialities such as Cumberland Mustard, and Alston Cheese. Alston Moor grew as a lead mining community over four centuries ago, with Alston town serving the mining families. You can see the history of the lead mining industry in the area at the Nenthead Mines Heritage Centre, nearby. 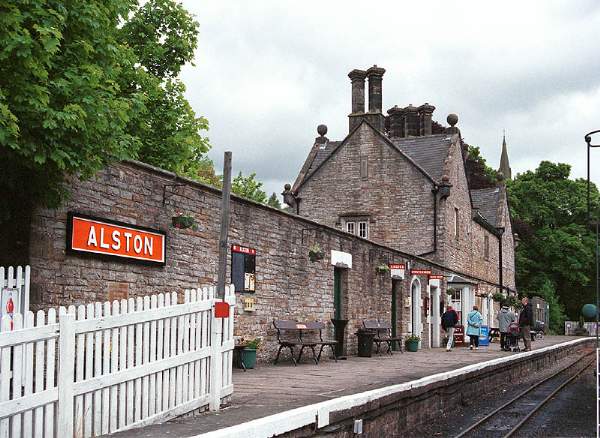 St Augustine’s Church was built in 1869, but records show a church has existed here as long as 1145 AD. Inside the church is an interesting clock, brought from Dilston Hall, the home of the Earl of Derwentwater.

The Gossipgate gallery, displaying regional arts and crafts, is housed in the former Congregational Church.

The A 686 from Penrith in Cumbria to Corbridge in Northumberland, which passes through Alston, was chosen by the AA Magazine as one of their ‘Ten Great Drives’. Between Alston and Melmerby, the road climbs the Hartside Pass to a height of 1904 ft, from where there are magnificent views across the Solway Firth to Scotland. This long and steep climb also forms part of the Sea to Sea Cycle Route.

Part of The Pennine Way long distance walk is through East Cumbria, from Alston, and Garrigill, over Cross Fell (which at 2930 feet is the highest point on the Pennine Way), Great Dun Fell, towards Dufton, then on to High Cup Nick and Cow Green Reservoir, on the border between Cumbria and County Durham.