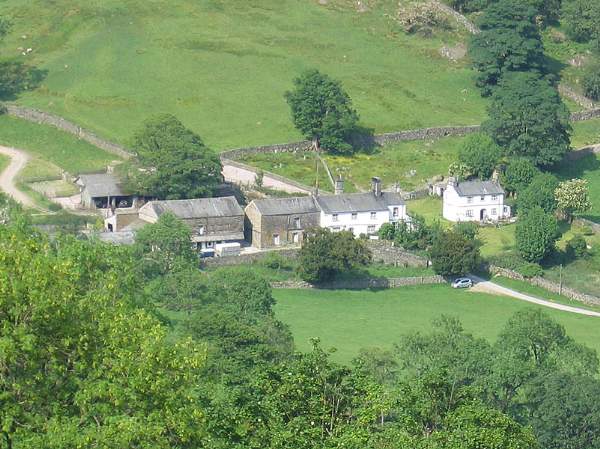 
Beatrix Potter married William Heelis in 1913, when she was 47, and for the next ten years lived the life of a country solicitor’s wife at Castle Cottage in Near Sawrey.

In 1923 Troutbeck Park Farm came up for sale. This large sheep farm of 1900 acres was spectacularly sited on the lower slopes of Kirkstone Pass. It was under threat of development and Beatrix Potter was keen to keep the farm together as working unit, so she bought it.

Three years after she bought it, she decided to run the farm herself, with the aid of a shepherd, George Walker, who was the brother-in-law of Tom Storey who ran Hill Top Farm in Sawrey. Beatrix had a house built for the shepherd – to the right of the farm-house.

They built up a celebrated flock of Herdwick sheep, a breed of small hardy sheep with course dark wool which is indiginous to the Lake District. Even in the 1920’s they were a breed under threat as more and more farmers bred other breads of sheep with softer fleeces and more productive lambs.

Beatrix Potter used the farm as a setting for the Fairy Caravan stories, and several other pieces. Some of her writing was done in a little study she had at the farm.

In the 1930’s Beatrix was made President of the Herdwick Sheepbreeders’ Association. 
When she died in 1943, Beatrix Potter left fourteen farms and 4000 acres of land to the National Trust, together with her flocks of Herdwick sheep.

You can find out more about Beatrix Potters life as a farmer in the National Trust booklet ‘Beatrix Potter and her Farms’ by Susan Denyer.

The National Trust have also published a little book by Elizabeth Battrick – ‘The Real World of Beatrix Potter’, which uses interviews with people who knew her, including Tom Storey. It outlines the support given by Beatrix Potter to the National Trust and the influence she had on the Trust’s present farming policy.