John Ruskin died on 20 January 1900. His colleague W.G. Collingwood organised a memorial exhibition that summer in the newly extended Assembly Room of Coniston Institute. The proceeds from the exhibition not only paid off the outstanding debt on the Assembly Room but raised sufficient funds to build a further extension to house a permanent memorial to Coniston‘s most famous resident – the Ruskin Museum. 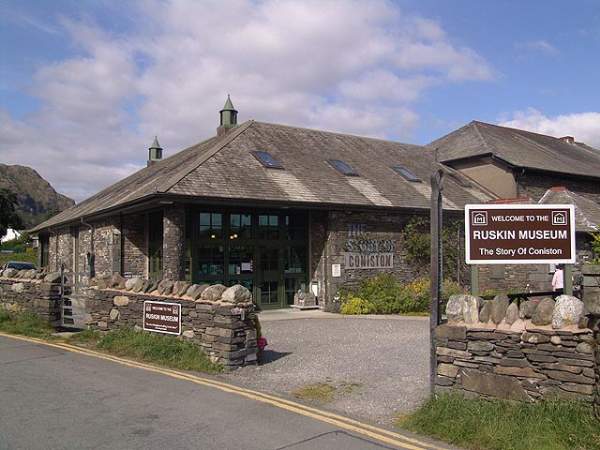 Ruskin’s heirs, the Severns (who did not wish to open Brantwood to the public), and W.G. Collingwood gave a comprehensive selection of watercolours, drawings, sketchbooks, manuscripts and personal memorabilia to the new museum. Collingwood persuaded his antiquarian and archaeological friends to donate various artefacts relating to the history of Coniston.

The Ruskin Museum was opened at the end of August 1901 by Canon Rawnsley, a devoted follower of Ruskin, and has attracted numerous visitors ever since. It was to be more than 50 years before Brantwood was opened to the public in accordance with Ruskin’s will. In the 1980’s, the Ruskin Museum was identified as one of the collections in the North West most at risk, and a comprehensive development scheme was devised to secure the long-term welfare of the items gifted to Coniston in memory of Ruskin. An £850,000 development scheme (funded by the Heritage Lottery Fund, European Regional Development Fund, Foundation for Sport and the Arts, the Rural Development Commission and others) was completed early in 1999. The Ruskin Museum re-opened on 1st May 1999. The new displays cover Coniston‘s history from the stone age (Langdale axes and other implements) and the Bronze age (weapons and other artefacts) to the jet era (Donald Campbell and Bluebird) via the copper mines and slate quarries which riddle the surrounding fells, charr fishing, and Herdwick sheep husbandry.

The Ruskin Museum contains a fine collection of Ruskin linen and lace, from the cottage industry he inspired and encouraged in Langdale to provide work for local women. The Ruskin Museum displays trace how his powerful belief in the power of art to mitigate the dehumanising effects of the Industrial Revolution led him inexorably into the political arena, and demonstrate how his ideas inspired so much of what we take for granted as the ‘British Way of Life’, from old-age pensions and free health care to universal education, street cleaning, and the environmental movement.

Visitors can enjoy Ruskin’s skills as a draughtsman and watercolourist or be dazzled by his intellect. Information comes from the objects themselves, from text panels, from touch-screen monitors, from videos and from an interactive audio-guide system (available in French German and Japanese, as well as English). 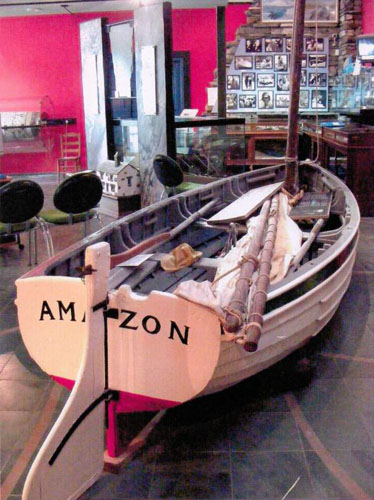 Here you can see the sailing boat Amazon, as featured in the children’s book ‘Swallows and Amazons’ by the author Arthur Ransome. The story was based on locations around Coniston. The photo was kindly supplied by Sophie Neville, who played “Titty” in the original film.